Doris Davis is walking across America.  The walk is a team effort, four walkers, including Doris’ daughter, Viveka Davis, will walk the entire 3000 miles from Oceanside, California to Washington, D.C.  Doris is committed to 1500 of those miles at over 11 miles per day.  They are accompanied by two modest RVs an the team will alternate walking days with support chores.

Doris is 72 years old and, lately, an interfaith minister.  The first footfall may have been on March 8, 2011, but, surely, the walk started in Berkeley in the 60s, where Doris was a student. 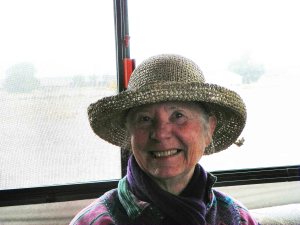 Asked if she was a hippie, Doris said she was a pre-Beatnik Bohemian, but by whatever name, she was active in the movement that set about to change the world.  A movement that surely altered the evolution of our entire society at the level of our most basic institutions.

Her path toward social activism came to an abrupt halt when a child protective services agency took her four children away and agreed to return them only if she could guarantee she could protect them from their abusing father.  So she divorced her Fullbright Fellow husband and found a career in university administration to support motherhood.

Asked why she is walking, Doris answered that she asks herself that question every day.  One of her blogs, http://gatheringwomentum.blogspot.com/ tells there are an outer answers—labels for goals–and an inner answers—gratitude and personal completion.

Doris, Viveka, and I sipped our way through 20 cups of tea in six non-stop hours of conversation and I came to believe Doris is walking to raise awareness for a couple of her core beliefs.

From another of her blogs at http://www.women-walk-the-land.com/women-blog.html

“. . .women’s full participation and contribution, in partnership with men, is essential now to resolve our global challenges”.

She believes there needs to be more women in the world’s leadership.  Women’s disposition to listen, discuss, and compromise will dilute male aggressiveness

“Western women will lead the world out of its present chaos.” A statement she attributes to the Dalai Lama.

“Western women have come a long way,” she says, “however there is further to go.  One of women’s tasks is to raise up women everywhere.  Most of the world treats women as chattel, beasts of burden, disposable.

“I am not angry with men.”  Doris says.  “What I believe is, as a nation, we have lost our vision.  We need to return to the vision of our founding fathers and this is why Washington, D.C. is our destination. “

Finally, I asked, how can one woman make a difference?

“By being a good example.” She said.

This is Doris’ story but I am unable to tell it without mentioning two of her children.

[Name to be inserted as soon as available] her son who was permanently injured in a teen-age auto accident.  Paralyzed from the belly button down, he got a scholarship in wheelchair basketball to the University of Illinois.  It is the story that taught me to not infer “permanently disabled” from “permanently injured.”

Viveka, who is traveling with Doris, was a successful movie star by the time she was in her 20s.  She played in a number of movies and TV productions and starred as Wynonna Judd in the 1995 mini-series, Love Can Build a Bridge.