I pedaled my bike over the rise and Roy came into view.

He was stopped on the opposite side of the road, straddling his bike–his feet planted, his body sagging on his elbows on his handlebars. His head down, I could see only the wide-brim of his black felt hat and its jaunty three-inch red, plaid band.

I went over to him, my mind racing for a howdy-phrase, but could do no better than, “You doin’ OK?”

He raised his head and I was looking down the mine shafts of his eyes. 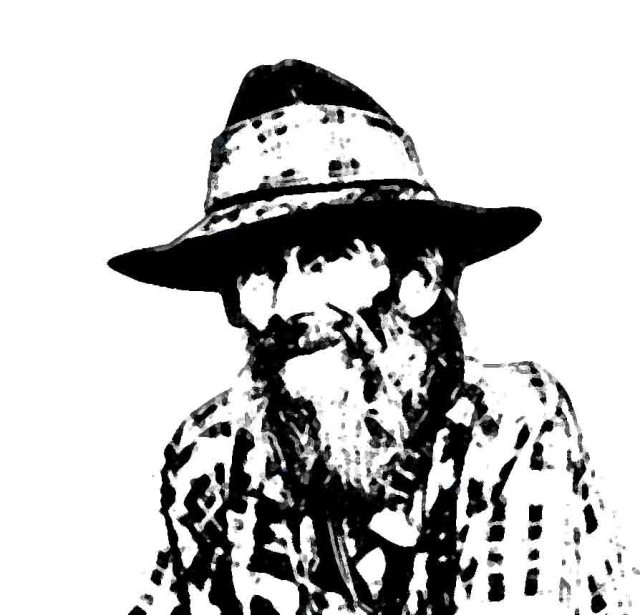 His dust-storm-dark face—was narrow and sharp as a woodsman’s blade.  His body, lean as an axe handle, was likely just as hard.

His foot-long beard, sparse, square and, gray, stretched straight to his chest and matched his pale brown and gray shoulder-length hair.  It was as though the beard of an ancient Asian priest had been glued to the face of a woodsman.  A shark’s tooth on a string peered from the vee of his shirt.  I guessed him to be six feet tall but weighing less than a hundred pounds counting the two knives he wore.

“You living out here in the desert?” I asked.

“I’m here for a few months but I am more of a mountain man.” He hesitated as though deciding whether to go on.

“I am a free man,” he said,his voice so dry it made me thirsty.  The words themselves were made of the sand and gravel of the Arizona desert plain where we stood.  He looked down at my touring bike, then at me.

“Probably the only one you’ve ever known.”

A remarkable statement that was the beginning of a dialog which sprawled over five days.

He occupied himself taking my measure.  He studied my clip-in bike shoes and slowly scanned upward at my Lycra cycling tights, shirt, and bike helmet.  We both rode bikes, but the similarity ended there.  I was from a planet that had a few more amenities than his.

His mountain bike asked no forgiveness from the terrain, its knobby tires could tractor their way through anything.  No department store special, his Diamondback trail bike had quality hardware any serious cyclist would be proud of.  The trailer alone, if it were bought new, would not get change from a $500 bill.

“Why do you want to know?” was the quick reply.

He squinted at me for a long second, then said.  “I’m Roy.

“What makes you think I know nothing about freedom?”

“I’ll bet there are a couple of stories there.”  I said.

“There are a lot of stories.  I’ve got them written down.  I’m not stupid, you know.  I have some education.  I might like to get it published if I could figure out how.  I have a lot of stuff.  I don’t want to publish the mountain man stuff.  It is the thoughts, I’ve written down a lot of thoughts.  Kind of like mountain wisdom.”

“I am a writer,” I said, “and an editor and know a lot about how publishing works these days–nothing easy about it–I am writing a blog.  Do you know what a blog is?”

“I’d talk to you more about writing and publishing but the sun is getting low.” He said.  “You want to come find my camp?

‘Follow this road, when the paving turns right, go straight onto the dirt.  Go left at the second or third dry wash, I am back in there.”

I asked him to write something, whatever he wanted, 500 words, if I liked it, I will publish it in my blog.

It was after 4 pm.  The temp would soon begin to cool and it would seem the sun was dropping faster.  Darkness comes to the desert like a river of ink.

17 Responses to 1.The Mountain Man