In the oncoming dusk cars continued to arrive and leave the park.  Dogs were walked, fisherman cast their lines, people sat on benches and stared across the bay that was beginning to dot with the lights of evening.

And so even as it grew dark, I stayed in my spot not fifteen feet from the seawall to photograph and write and share still another unique place.

I catnapped between being awakened by the schedule of night activities.

The park was busy even as midnight approached.  A young crowd filtered through. The car radios were louder and had a heavier beat than the crowd from earlier in the evening.  Teens came and walked and talked to each other or to their cell phones.  In the light of the incandescent fountain, the kids’ flirts, giggles, and smooches rippled across the park unnoticed by the few, ever present fishermen.  But I noticed a pang of envy in the pit of my stomach.

I strolled the docks, passing beneath the Christmas nights.

At three a.m. I walked the circle and counted seven cars and pick up trucks.

At four-thirty another pick up truck arrived.  Fishing gear was unloaded soundlessly and carried to the pier.

A night heron perched atop a purple martin condo.  His turned and gazed into the water, left, right, and behind, eyeing the baitfish he’d order for breakfast.

The six-thirty shift arrived with the dawn.

The avian breakfast club, youngsters as well as gray and distinguished gentlemen, took their place at the counter awaiting breakfast. 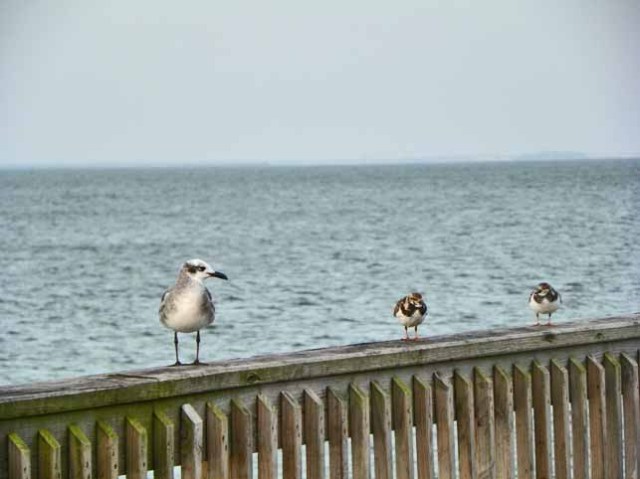 Oh, what a sweet vista to wake up to.  What a great getting’-up morning.

The Jolly Swag did not move for the whole Sunday amid the energy of the hundreds of people who feasted on their city park.

The day warmed to top-down temps. 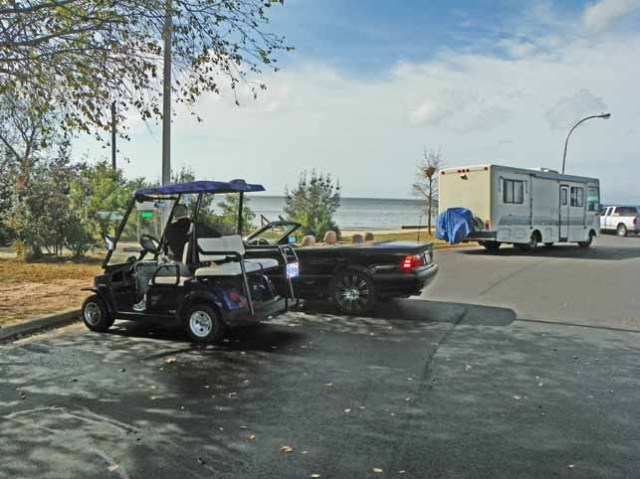 I followed a path up the beach.  In the green spaces, several hundred-strong flocks of geese peck between the threadbare carpet of pine needles. Well-mannered are these country geese, leaving not a single deposit on the walkways.  Perhaps some could be hired out to toilet-train the geese population of Oakland’s Lake Merritt.

I strolled and dozens of people said hello to me, asked how I was doing, and opined this was a lovely day.