Sam Walton was a salesman for J. C. Penney. He leased a store from a man who had a Ben Franklin franchise. At the end of five years the owner declined to renew the lease, preferring to give the store to his own son. Walton searched for a new location and decided on a store on the square in Bentonville, Arkansas. He got a Ben Franklin franchise of his own and opened his first store. 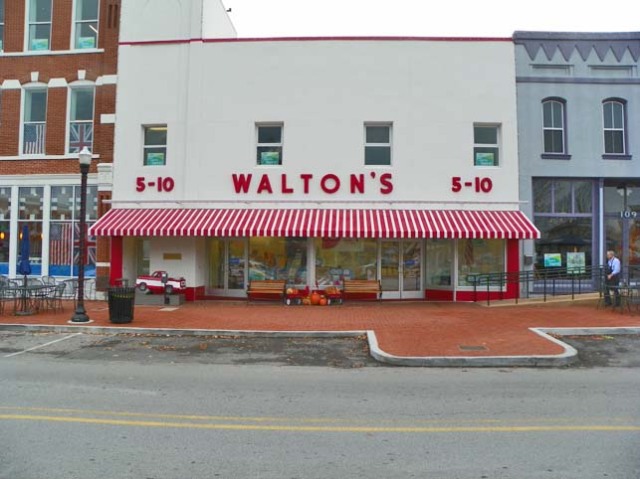 Today, there are over 8000 Walmarts worldwide, with 2.1 million employees. The first Walmart is a museum and visitor center.  Bentonville is still the home of Walmart’s corporate office.

The list of Walton’s endowments to education and the arts in Arkansas is long. Crystal Bridges Museum of the Arts, the gift of Alice Walton, is the most recent.

This handsome complex is destined to be recognized as one of the premier Art Museums in the country.

Alice Walton offered a New York institution of higher learning $30,000,000 for a painting by a great master they owned. The institution, horrified at the notion the masterpiece would be moved to a state where “there was not a single resident, who could appreciate it,” thereby raising the bar for the definition of supreme arrogance.

They raised enough money to match the offer and keep the piece in New York.

4 Responses to Bentonville, Arkansas, Home of the First Walmart