Montezuma never slept a night in Montezuma’s Castle.  He never even got near it, nor is the castle a part of Apache history.  Long after the site was abandoned, the six-story cliff dwelling was discovered by white men, who gave it the name that stuck.  Montezuma’s Castle is a 20-room structure that was home to 35 people. 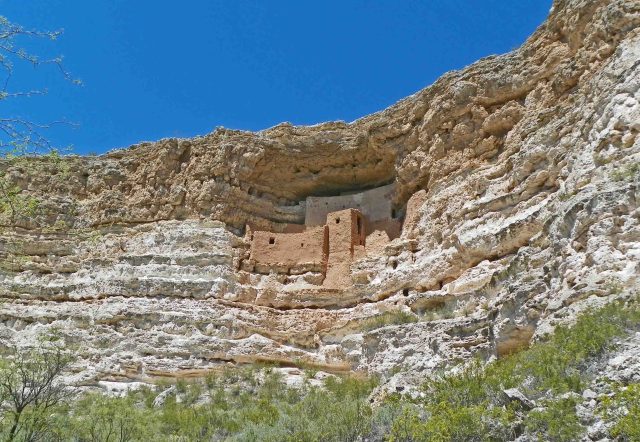 The stratified limestone cliffs were formed over millions of years by the remains of crustacean sea life from when the area was a large inland sea.

The earliest settlers in the area are believed to be the Hohokam Indians,  1200-1400 years ago.  The masonry structures were built about 850 years ago by the Sinagua (“without water”) Indians, who occupied them for 150-200 years.

Today the site, maintained by the National Park Service, offers more than a thousand people a day the easy stroll  from the visitor center to the base of the castle.

There, Larry, the volunteer interpreter spoke of the customs and artifacts of those who lived there and answered our questions.

Did they build on cliffs for defense?

Since the inhabitants of the area were not militant, it is not likely the 100-foot high structure was designed to be defensive.  It is thought that simple spirituality moved the original builders to choose a site that required 40 feet of ladders and several traverses to access their condominium.

Why were these settlements and many others in Arizona abandoned?

The best guess is climate change, a long period of below average rainfall depleted the water for agriculture.  The game animals also left and the people did not have sufficient resources to survive in that location.

How did they carry groceries and water up ladders? on their backs?

They had them delivered.